Adirondack chairs have been a favorite piece of outdoor furniture for more than 100 years. Believe it or not, this incredibly comfortable chair was invented right here in America. This wood chair crafted out of straight boards was the brain child of Thomas Lee, a man who was vacationing in Westport, New York the summer of 1903. 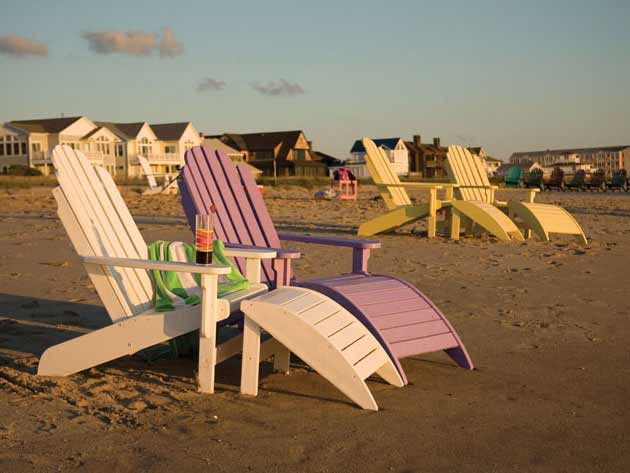 Thomas Lee’s original design is very similar to the Adirondack chairs that are still for sale today. It featured 11 flat boards that were arranged to create a straight back, wide armrests, and a slanted seat that made the chair so welcoming and inviting. His goal was making a chair out of the materials presented around him, the many trees of the upper Appalachian mountains.

When he came back from vacation, Lee shared his idea with local contractor Harry Bunnell to see if it could become something they could produce for a profit. Bunnell instantly saw the appeal of the chair and without Lee knowing, filed for a U.S. Patent in 1905. Harry Bunnell began handcrafting this chair for anyone who asked. Each of his chairs were made out of Hemlock, which was then painted one of three dark brown, medium brown, or green.

Harry Bunnell was not the only one to receive a patent for and start manufacturing the Adirondack chair. Irving Wolpin made slight adaptations to the original design before receiving a patent of his own in 1935. The rounded backs that we still see today can be attributed to his more modern version of the original chair.

The comfort and beauty of these chairs has attributed to them being a popular choice in outdoor furniture for more than a century. Today, every outdoor furniture store carries various versions of Adirondack chairs, including swing glider, love seat, and child’s size adaptations of the design. The original hemlock wood has been traded out for more durable materials, the most common being pine, cedar, cypress, imported teak, and plastic lumber.

If you purchase a pine version, it is important that it is primed before use and treated annually with another coat of sealant to protect the wood, which is prone to termites, mildew, and wood rot. Cedar, cypress, and imported teak, on the other hand, are naturally resistant to bugs, mildew, and rot, making them ideal for this application. Plastic lumber is by far the most modern choice in Adirondack chair material and it is also your opportunity to go for something more bold and definitely lower maintenance. While plastic lumber does come in natural wood tone colors, who could resist adding a pop of color to their space with a sunshine yellow, fire engine red, turquoise blue, or bright orange version?

What was the Adirondack chair originally called by designer Thomas Lee?

Answer:
Lee named the chair the Westport Plant Chair after the location he was vacationing in, it was only later named after the mountain range Westport was part of.